This article appeared in the SPERDVAC (The Society to Preserve and Encourage Radio Drama Variety and Comedy) newsletter, as a tribute to both Frank Nelson and actress Virginia Gregg, who passed away within days of each other.
Only the portions of the article concerning Frank Nelson are presented below, while we also send best wishes to Virginia Gregg’s loved ones and fans.

A Special Tribute to Frank and Virginia

Many great radio voices have been stilled this year. We pay tribute here to two more who left us within days of each other – Frank Nelson on September 12th and Virginia Gregg on September 15th.

As those of us who listen to radio programs know well, both Frank and Virginia were extremely talented people. We in SPERDVAC feel a special loss, not only because they were honorary members, but because many of us had the opportunity to get to know them personally over the last few years. They leave a void which will remain unfulfilled for us.

We are grateful to the following friends, who worked with them during the radio days, for sharing their memories of Frank and Virginia with us.

More and more, as I grow older, I realize the immutability of the fact that all of our friends are leaving us. I once had a mother-in-law who told me that the only way she could keep track of her friends was to read the obits! I was young then and she was in her 80’s so it didn’t strike home quite as forcefully as it now does.

As audio historian for the Pacific Pioneer Broadcasters, I felt I should start keeping an “obit file” some years ago. It is bulging now and keeps on growing. It includes many of my dear friends both in and out of show business. But the two who left us recently really floored me. Virginia Gregg and Frank Nelson. Two more talented artists, in many directions, it would be hard to find…

…Frank Nelson…anyone who really knew him couldn’t help but admire him…an intense, voluble, brilliant man with a steeltrap mind who should have been a trial lawyer. The most retentive memory I’ve ever encountered and a love and caring concern for the union, AFTRA, he helped to form and for his fellow actors, whether they thought as he did or whether one of them or all of them tried to “top” him on the floor of our convention or in one of our board meetings.

I helped form AFRA in Chicago at the same time Frank was doing the same in Hollywood and so I’ve been at a lot of conventions and board meetings myself but I never saw anyone succeed in beating him to the draw, so to speak. I did witness a bunch of them in a board meeting one night try to beat him into the ground. They didn’t succeed…although they made him cry, openly, on the floor where he stood his ground, unable to believe they were doing this to him when, really, all he was attempting was to acquaint them with the facts of the issue on the floor. I don’t mean to sound like a “hero” but I was so dumbfounded and outraged at such treatment of a truly great mind that I endeavored to defend him. When I had finished, I had to force him from the floor and make him sit down and compose himself. I shall never forget that incident against a man who did more for actors than anyone else ever had. He was all guts and brains and many people’s egos couldn’t stand admitting that fact. They would never have made him break had he not been fighting for his life against the terrible thing that killed him.

He served as local and national president of AFTRA, wrote most of our constitution and by-laws, was a formidable negotiator, a tremendous speaker – ad-lib, that is – and the creator of our pension plan for actors. Frank was also the recipient of AFTRA’s “Gold Card”, the highest award in our union and given only to those who have performed truly meritorious services for AFTRA.

Beyond that, Frank was one helluvan actor and a funny, funny creative comedian as well. He, also, was one of us “old-timers” from the “golden days of radio” who had all that fun doing the SPERDVAC “SUSPENSE” drama a few years ago. His former wife, Mary Lansing, (a fine actress in her own right), and Frank parented a lovely daughter and fine son. His devoted widow, the beautiful and talented Veola Vonn, is once again alone (except for her many, many friends), having been married previously to Hanley Stafford, deceased for many years.

Our deepest sympathy is extended to these dear people I’ve mentioned. There is little to be done to relieve their suffering, but by the same token, both Virginia and Frank are no longer suffering from that damnable curse, cancer, which put an untimely end to their fruitful lives. God bless them both.

My memories of Virginia Gregg and Frank Nelson include many years of observing their marvelous talents in bringing script characters to life in forty years of radio, when I was either the organist/pianist or orchestra leader.

One humorous memory of Frank, who did so many shows on a given day that he once forgot, on SUSPENSE, that it was not the rehearsal — we were On the Air. Frank was sitting at the actors table, when he started loudly clearing his throat, rattling his script, and scraping his chair. Amid frantic waving from the booth and the other actors, he was finally convinced that we were On the Air. His eyes nearly popped out and for once in his life, Frank Nelson was subdued…

Obviously, Frank Nelson was a unique man, a versatile actor and one helluva union man. We neophytes just beginning our professions were familiar with and in awe of the “Yeeeessss?” man on the Benny show, but when we worked with him on dramatic shows, another revelation insinuated itself – his serious acting was as expert as his comedy. But it was his persona, his integrity, his infectious personality that intrigued his friends and confreres. However, ours was a peripheral acquaintance until my election to the Board of AFTRA, where I was impressed and astonished by his penetrating, facile mind (the envy of the most legal of eagles), with the passionate tenacity of a pit bull. His brilliance, coupled with his cognition of an actor’s financial and health problems, compelled him to become a consumed, driven man, dogged in his persistence to see his program endorsed by a many-times intransigent board. Every actor who has been ill, who has retired, who found the need to borrow money from the union can thank one Frank Nelson for that financial relief from anxiety. Future actors who benefit from his personal sacrifices and selflessness will have suffered a monumental loss from not knowing personally the man who fought to achieve their comfort and dignity…

…What a black weekend that was that took Virginia Gregg and Frank Nelson from us. Voids that will never be filled. The loveable irascibility of Frank, who had the annoying habit of being right 99% of the time. The other 1% he was half right. The people in our business, particularly the performers, are eternally indebted to the man who dedicated his life to making things better for AFTRA members. AFTRA can never fully discharge its obligations to Frank Nelson. Leader, counsellor, and a man with a forthright and adamant heart. Our last phone conversation ended with “I love ya, Parl. God bless.”…

We mourn the loss of Virginia Gregg and Frank Nelson. But in a larger sense, we rejoice in the knowledge of what they have contributed. Their loss is great, but their contributions to radio and their effects upon our personal lives is beyond enumeration. We thank them both.

…The reality of an AFTRA without Frank Nelson is a challenge to accept. In my recently delving into AFRA and AFTRA history, one observes that many have served and then gone on their way; some have left and then come back to help performers officially. But the man with the photographic memory, the fount of first-hand continuous knowledge about every facet of the union…well it was his domain. All of that plus the vast experience of his professional life. His famous “yessss?” on the Benny show…he was forever a “yes” man to the needs of performers. A man who from the beginning of AFRA in 1937 was a leader on behalf of performers, and those in need. I believe there will never be anyone to match his brilliance and unceasing dedication on behalf of others.

…Beyond his love for his wife, actress Veola Vonn, and his two children, Frank Nelson’s entire life was devoted to AFTRA and the welfare of his fellow performers. In the beginning, he helped start AFRA. Through the years he was always on both the Hollywood local and national boards. He was president of the local for five years and National President for three years. He helped formulate the AFTRA national pension and welfare plan – recognized as among the finest in the country, and personally headed up and supervised our local Sick and Benefit Fund, which has been a godsend on an emergency basis to members who have found themselves in dire straits, and not eligible for help from other funds. He was active in the formation of the AFTRA (now AFTRA/SAG) Federal Credit Union.

Remembered by listeners, from his Jack Benny Program character with its elongated “YEEEEEEES – ?” through his many hundreds of equally famous parts in radio, television and motion pictures, he was one of our few performers who received the compliment of being imitated by others.

Frank Nelson filled his very own special niche, to which others can only aspire. He will always be remembered.

On behalf of all SPERDVAC members I want to extend our sympathy to the families of both Frank Nelson and Virginia Gregg. Both Frank and Virginia will be greatly missed.

From a personal standpoint, I will always remember the warm and friendly times I spent with Veola and Frank Nelson and with Virginia Gregg. They were always more than willing to pass along any information about places and events concerned with radio’s past. On a personal note, it was not unusual to receive a phone call or Christmas cards wishing us good health. Frank and Veola aided in finding some radio people for our monthly meetings. Virginia guided us to two or three discs leads. These were special, warm people who enjoyed their association with SPERDVAC. And we at SPERDVAC will always remember the many things they have done for all of us. 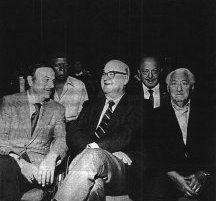 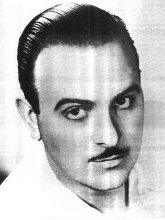 One of Frank Nelson’s loves was trains. He is pictured here on board the “Jack Benny Special” in February 1985. 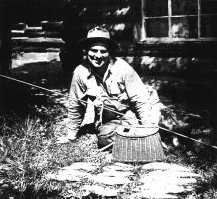 Fishing was a life-long passion for Frank Nelson.

Frank Nelson with Veola Vonn at the 1984 SPERDVAC convention banquet